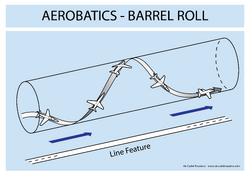 The high-G Aileron Roll is a defensive maneuver in which the defender goes into a barrel roll with the intent of lowering his net forward velocity and forcing his opponent to overshoot, if he is unable to react quickly enough to compensate.

Similar to the barrel roll but being much quicker, the snap roll is a roll that stalls (one wing) of the aircraft momentarily to instantly and temporarily lower your forward speed. This lower speed should hopefully cause your opponent to overshoot. Because it requires that the opponent not have enough time to react, this maneuver must be performed at close range, probably when already in guns range.

Unavailable for mouse-aimers or other virtual instructor modes.

If your turn rate or roll rate is superior to that of your opponent's you can start scissoring. This involves a bunch of turning while rolling left and right to keep the turns alternating in direction.

The spiral climb can be used if you have a climbing advantage over your opponent.

Best case scenario your opponent is simply unable to keep up but often it's a delaying tactic to allow for teammates to come help you.

It has the advantage over regular straight climbing by allowing you to move relatively little (allowing for teammates to come help you easier) and by constantly turning and making yourself a more difficult target than if you were simply climbing straight.

The spiral dive can be used in two ways, to out-turn your opponent or to force an overshoot.

A heavier wingloaded plane will be unable to follow a lighter wingloaded plane, in which case the spiral dive is simply being used as a tight turning circle and the dive adds energy into the mix. The pilot being chased can adjust the depth of the dive to maintain the chase at the speed his plane is best suited for. Should the heavier plane make the mistake of maintaining the chase throughout the spiral dive he will quickly find himself out-turned and with an opponent on his back.

By going into a dive both planes pick up speed. By cutting engine and deploying flaps, airbrakes and perhaps even landing gear you can trick an opponent into speeding past you as you quickly slow down. The dive adds energy to the unwitting chasing plane and the spiral turn hides this trick by distracting the opponent while giving him a difficult to hit constantly turning target.

This article is a stub. You can help War Thunder Wiki by expanding it.