Ground vehicles are AI controlled mobile ground units which vary in mobility, armor and weaponry. They are used as operation objectives and optional targets with XP and Lion rewards on nearly all maps within the game.

Ground vehicles come in three distinctive groups, Light, Medium, and Heavy, which relate to the armament required to kill them.

Light variants require very little firepower to kill, as they have little to no armor. Machine guns and cannons of any description can easily kill a light target, so long as they hit the target. Bombs are equally effective as 50kg+ bombs will one hit these targets.

Light vehicles are most common around the lower tiers as most countries lack the armament to kill anything tougher. However they still can be found in higher tier battles. These vehicles include armored cars and mobile AAA.

Medium vehicles require more damage to kill than light targets. Unlike the light variant, they cannot be damaged by default machine gun or cannon fire, needing the ground targets ammunition type equipped to inflict damage on the target. Bombs 100lb+ will guarantee a kill (if it lands close enough to the target). This type of vehicle can be found from lower tiers up to high ranking battles. This class is made up of medium tanks.

Heavy vehicles require the most amount of damage to down. Machine guns and cannons cannot damage them, requiring 250lb+ bombs to one-shot the vehicle. These vehicles are found on higher tier maps where bombers (and some fighters) are able to carry the required heavy bomb loads to kill them. This class of vehicles is made up of heavy tanks. 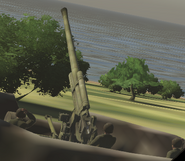