Aerial combat is a 3-dimensional art with many intricacies that take years to master. Studying these tactics seriously by reading up on, practicing, and using these principles to your advantage will greatly increase your effectiveness in a dogfight.

You should always fly with the Rules of Air Fighting in mind, but like any set of rules, they are meant to be bent to suit the situation at hand. As with any other game or combat, it is better to bring friends. Wing tactics are covered in its own article.

The goal of this tactic is to maintain a constant energy advantage over your opponents and making yourself as difficult to engage as possible. This is done by engaging a bogey at a significant altitude advantage, diving on your opponent (booming), and then, after firing, climbing away to a safe altitude (zooming).

It is important to note that altitude alone is not enough, there needs to be a distinct energy advantage or the bogey can simply follow into the zoom climb and counter-attack, which is what an energy fighter may try to do against a boom and zoomer by hiding his energy state.

Planes best suited for this tactic typically have:

Energy fighting is an art in which you try to maintain or gain an energy advantage over your enemy, then use this energy advantage (and consequent maneuverability) to dominate your opponent.

If encountered by an opponent with more energy the opponent will usually start performing boom and zoom attacks. The energy fighter must try to build up their energy by taking the time between attacks to climb to whittle away at the bogey's energy advantage by raising his own, or maneuvering in such a way so as to manipulate the opponent into wasting their energy while conserving his own.

The goal is to trick an opponent with a higher stall speed or lower climb rate, or simply less energy to follow you into a zoom climb. Once both planes slow down, ideally your opponent runs out of energy quicker and stalls earlier than you. This then gives you your opponents back and an opportunity to shoot at a very slow and vulnerable enemy. WEP/throttle boost and flaps should be used to try and delay your stall as much as possible. If the enemy doesn't stall earlier than you or if this is attempted with too little distance, you risk becoming a vulnerable target. Try swaying side to side to avoid getting shot down in the process.

The cobra is a stall technique, which can help you to lose a tail, by causing your enemy to overshoot. In order to perform this technique you need to lose energy as quickly as possible. Start climbing, reduce your throttle to zero, release your gear, flaps and air brakes (if available), and finally, turn off your engine. After your enemy overshoots, turn your engine back on, then throttle up, regaining flight.

WARNING: This is a risky technique. If your energy is too low it will likely result in a stall. 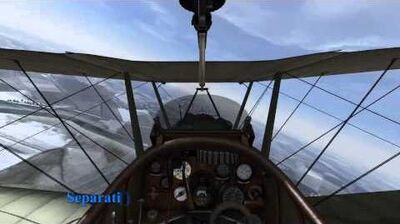 A more subtle variant to trick your enemy into a stall, this technique is named after a technique Muhammad Ali used, in which he lay back on the ropes of a boxing ring and let his opponent hit him for almost an hour, letting the ropes absorb most of the energy of the hits and tiring out his opponent. Once his opponent was tired and had his guard down Ali was able to down a defenseless opponent.

The idea in this aerial tactic is similar, the goal is to trick your opponent into climbing at you and hiding your energy advantage so as to make him think he has the advantage and climb after you enthusiastically. This maneuver must be made close enough to the opponent to trick him into think he's close to a gun solution but still far enough that he never actually has a shot on you. Again, if performed incorrectly you make yourself a very vulnerable target.